Hi Guys
and Welcome to my current car collection, these first two are perfect for 1:12 scale homes..who wouldn't want a beetle or a mini van to haul around the family spawn. :)  Ive gotta clean off those
Stickers and the mini van has some marks from a crayola marker.
the little rug rat went a little color happy on it..guess Mom didnt want to clean it up 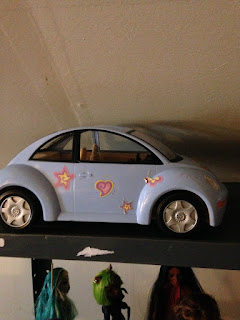 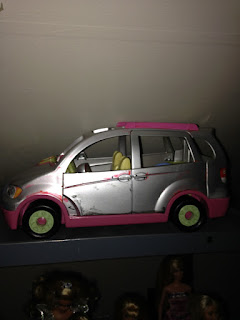 this one is my fav...it's a barbie Ferrari and it's in white which was very difficult to come by..I picked this up for 1.00..it's missing the hub caps on the other side and it's missing the rear view mirrors but it's Ferrari..who cares (Im keeping it too) 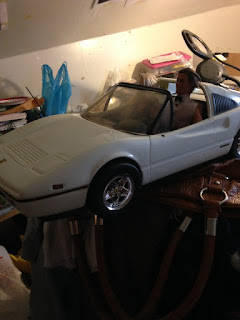 next up is the Barbie Ford Escape, Im keeping this too...I need something to haul the kids around 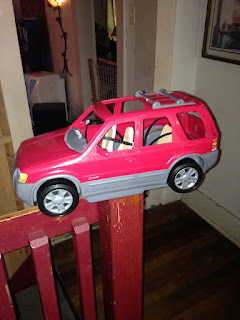 I picked this up for a buck too, it's an action man motorcycle, a girl on Youtube had scooters for her Momoko dolls (yes Im keeping this one too..I need something to park in front of the coffee shop Im building from scratch...more on that later) 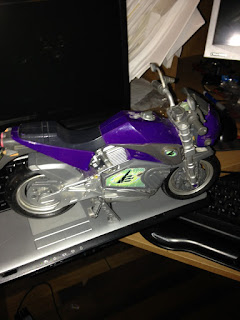 this is a cheap chinese knock off from the 80's..you could get them at Kmart for 10.00 Im putting this in my booth ...its for sale and gotta go 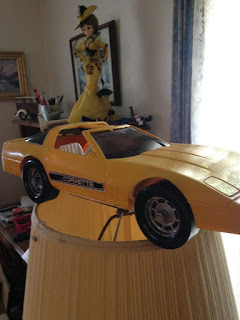 this is a my scene convertable..I'd keep it but I had 3 of them and this one isn't that special I have a barbie one on display at my booth..it's going to the booth even though it has faux fur seat covers..not a fan of the color either.

this is a Barbie Jeep, it's missing the windshield but it's a jeep so thats ok, Im putting it in the booth too but Im putting some of my summer dolls in it along with a surf board/boogie board and the sea doo (yea I got one of those too but it's going to the booth..Ive been very lucky this year) 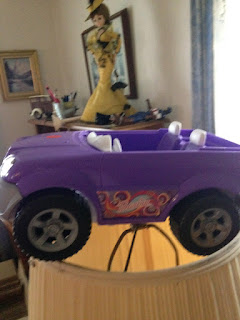 and last but not least a Barbie Moped, the girl who had Momoko dolls had three vespa's ...yes THREE...I'll have to settle for a Ferrari, SUV, Motorcycle and a Moped..Suck on that Momoko doll girl...uhh..I mean..yea for her..glass half full right :) 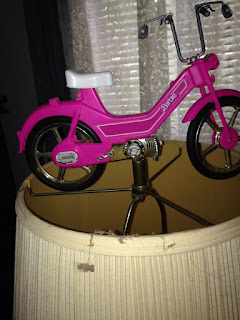 and this is my Happy Fathers day photo which is coming up, I missed Mothers Day cause I switched jobs ..oh well. 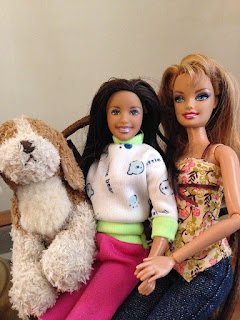 I think things are turning out ok for once, my room looks like a tornado hit it and Im one barbie away from a Hoarders Episode..I now have 3 of the little black dress barbies, one olympic barbie, 3 liv dolls 4 my scene barbies , I have 8 princess dolls and 1 prince, plus tinkerbell and two fairies...Im probably going to need an intervention soon..people are starting to call me the doll lady

Rich went picking (he's watched one too many american picker shows) and came back with a bag full of Barbies (or what looked like barbies..I was shocked but he paid 2 bucks for the entire bag.) I now have 2 Jem dolls that I have to make clothes and shoes for plus 8 1970ish barbies a few had their heads pulled off (thats an easy fix) matted hair (another easy fix) ink stains (again easy fix) so I spent a week on them fixing them up...I had a conga line boil perm going on ..oh yea I also got a horse that need a curl on her mane.   Im done..no more dolls..Im fixing them up..putting them on stands and calling it a day..I'll show you my coffee shop next time

Posted by Steinworks at 7:02 PM